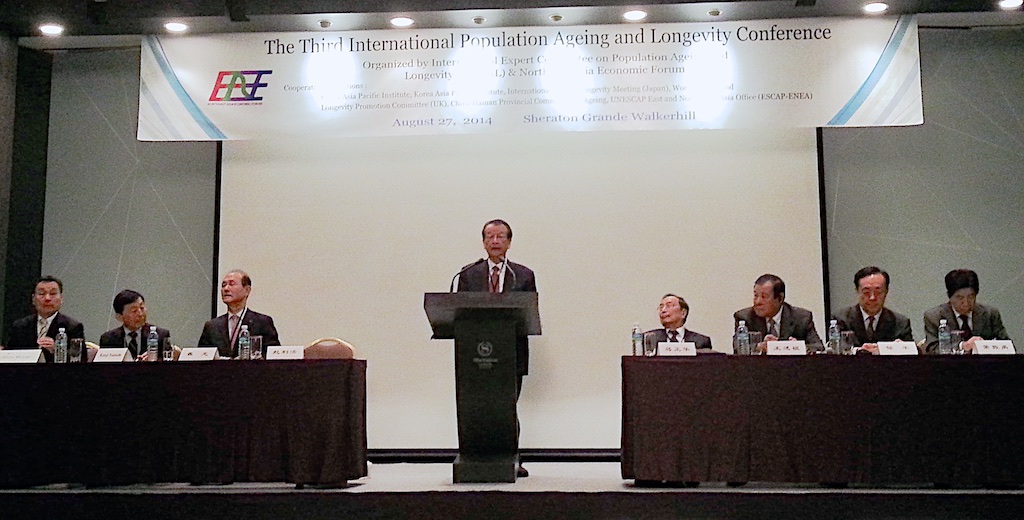 The Northeast Asia Economic Forum (NEAEF), co-hosted by the Korea Committee of the NEAEF and the United Nations Economic and Social Commission for Asia and the Pacific, East and North-East Asia Office (UNESCAP-ENEA), convened for the twenty-third annual conference in Seoul, South Korea on the 28th to 29th of August 2014.  Representatives from South Korea, the People’s Republic of China, Japan, Mongolia, Russia, the United States, the European Union, and UNESCAP assembled to discuss and promote economic cooperation and integration among Northeast Asian countries and their global partners.  The event was held at the Sheraton Walkerhill in Seoul, South Korea.

The 23rd NEAEF Conference panels focused on energy, transportation, infrastructure, finance and economic integration among Northeast Asian countries.  This year’s Forum built upon the twenty-two year legacy of an open dialogue among member countries toward regional integration, cooperation and peace building in the region.  The conference advanced NEAEF’s mission by targeting key issues and developing plans to increase regional cooperation and economic integration in Northeast Asia.

In the first morning session, distinguished representatives from each country conveyed their visions for regional economic cooperation in Northeast Asia.  The speakers shared a desire for economic integration in the region and proposed unique perspectives on how to accomplish this goal.

The morning session focused on several themes and the first was on Free Trade Agreement and trade cooperation starting with the formation of the CJK (China-Japan-Korea) and the meaning and future of the Trans-Pacific Partnership (TPP) Agreement for Northeast Asia. Speakers presented plans for developing of the Tumen River Area, a bilateral partnership between Russia and Japan, and “Smart City” planning for increased energy efficiency across Asia.  In conclusion, economic integration in Northeast Asia should be beneficial to all countries, and therefore, requires regional cooperation among members.

The afternoon sessions on energy cooperation involved presentations on energy security, alternative energy, a low carbon future, energy infrastructure and physical connectivity in the region.  Speakers addressed the need for smarter energy usage in cities and major living areas in Northeast Asia,  promotion  of renewable energy, increased energy independence through nuclear power in South Korea, and the proposed framework for North Korea to receive energy through a new Asian Super Grid, following successful integration of the Korean peninsula.  The region may increase its reliance on GOBITEC, solar wind from the Gobi Desert, and Natural Gas (LNG) imports from the United States, both proposed as new sources of energy.  Wind energy may increase, but Natural Gas imports are expected to increase more in Northeast Asia.

The second day addressed regional cooperation and integration within the Northeast Asian sub-region.  Historically, regional cooperation has been derived from the bottom-up, championed by business feeding the engines of economic growth. Integration has slowed recently, however, despite increased linkages.  The support of top leaders and officials will remain a critical component to advancing the goals of sub-regional integration.  The Forum has requested official endorsement to advance its initiatives and applauds current efforts.  Key areas of collaboration include trade expansion, infrastructure, energy, environment, and finance.  Northeast Asia is finding ways to build new rules of engagement for a future replete with new realities.

The conference discussed financing regional economic integration through cross-border infrastructure in the final sessions.   Chairman Je Yoon Shin of the Financial Services Commission in his speech  focused  on the financial policy for a reunified Korea, involving plans for a strong and sustainable economy for the Korean peninsula.

The conference sessions advanced the framework and mission for creating the new Northeast Asian Bank for Cooperation and Development (NEABCD).  The Forum acknowledged key benefits and potential challenges to establishing the NEABCD.  Northeast Asia recognizes that it must depend on itself going forward to fund and invest in growing infrastructure needs in the region.

The conference concluded with a dialogue on cross-border economic cooperation in the Tumen River Area and Korean Peninsula.  Progress continues in North Korea, although the realization of plans remains unclear.  Quality of life has improved substantially in Pyongyang and the South continues to search for mechanisms of cooperation with the DPRK as it develops special economic zones.  Russia and China proposed transnational rail and highway infrastructure to facilitate trade across the sub-region.  More opportunities for cooperation are expected to emerge as member countries overcome cultural boundaries and increase interpersonal communication.

In conclusion, the 23rd annual conference within a broader framework of the regional economic development and cooperation, allowed for national perspectives to be shared in conjunction with energy and resources cooperation. Regional economic integration in terms of institutional dimensions along with physical connectivity through cross border infrastructure development have been articulated. A greater focus has been placed on the greater Tumen River in the larger geographic framework of Northeast Asia linking North America and Europe. The very region that serves the interests of all Northeast Asian countries is the Tumen River Delta area where the Korean Peninsula, China and Russia share borders. Developing this area has strategic meaning, enabling peaceful resolution of conflicts in the Northeast Asian region.

Financing cross border infrastructures in this area will be a great challenge and at the same time, a potentially enormous benefit to the Northeast region as well as internationally. There appears to be a broad consensus on the desirability for a multilateral bank to provide long-term capital for regional infrastructure projects. The bank is aimed at increasing cooperative, balanced and win-win development in the region.

The Northeast Asia Economic Forum is expected to play a coordinating and catalytic role, through disseminating relevant information and facilitating dialogue with and among policymakers in Northeast Asia.