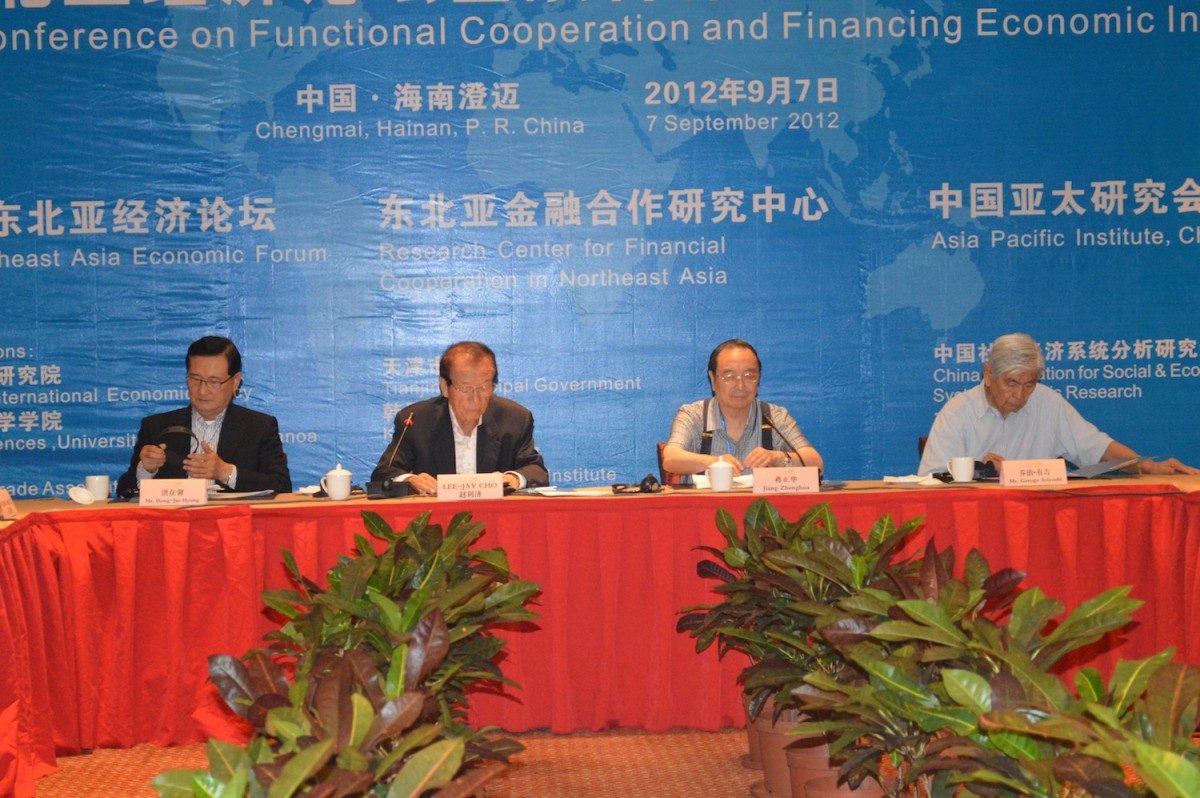 The Northeast Asia Economic Forum (NEAEF), in partnership with the Research Center for Financial Cooperation in Northeast Asia and the Asia Pacific Institute of China, convened the 21st annual NEAEF meeting in Chengmai, Hainan, China, on September 7, 2012. Representatives from the People’s Republic of China, Japan, Republic of Korea, Mongolia, the Russian Federation, the United States and the European Union met to take steps toward greater cooperation and integration among Northeast Asian nations. Hainan—the beautiful island of longevity in China, and a province whose rapid growth is being driven by a desire to modernize and promote tourism—served as an exceptional setting for discussing existing and new opportunities for Northeast Asia.

This year’s annual conference added to twenty years of significant accomplishment in the NEAEF, through the annual meeting process, and continued its vision for a peaceful and prosperous Northeast Asia through regional economic cooperation and development. By focusing on regional functional cooperation and financing, a great amount of discussion was centered on looking to the future and emphasized the need for Japan, Korea, and China to find the political will to work together on establishing the Northeast Asian Bank for Cooperation and Development (NEABCD).

The annual conference provided marked progress toward a common goal of regional integration through productive discussion of vital themes within the Forum’s sessions. The specific sessions focused on Financing Infrastructure Development in Northeast Asia, discussion of a Proposal for the Northeast Asian Bank for Cooperation and Development, and Energy, Environment and Cross-border Infrastructure.

An energetic opening ceremony included the welcoming remarks of Jiang Zhenghua, the former Vice Chairman of the Standing Committee of the People’s Congress, PRC, which underscored the importance of cooperation in Northeast Asia and the need for such cooperation to extend beyond mere economic relations. In his statement the Vice Chairman supported the work of the Northeast Asia Economic Forum in promoting Northeast Asian cooperation, especially the work of pursuing a Northeast Asian Development Bank. Remarks were also delivered by representatives of Japan (Kaifu Toshiki, the former Prime Minister of Japan, delivered by Ozaki Michio of JOICFP) and the USA (George Ariyoshi, Honorary Conference Chairman and former Governor of Hawaii). Additionally, there were keynote speeches from Bahk Byungwon, Chairman of the Korea Association of Banks and former Senior Advisor to the President of Korea, and Jin Liqun, Chairman of the Supervisory Board, China Investment Corporation and former Vice Minister of Finance, jointly with Zhang Zhixiang, former Director General, Asian Development Bank and former Executive Director of the International Monetary Fund.

The first session on Financing Infrastructure Development in Northeast Asia featured high-level presentations starting with Maeda Tadashi of JBIC on the countries' perspectives of the Northeast Asian Bank for Cooperation and Development (NEABCD) as well as discussion of past and future efforts of financial cooperation.  Commentary focused on functional cooperation and development. Commentary also focused on the need to have mutual trust and to overcome political and cultural barriers in order to move ahead in the future.

First, the Northeast Asia Financial Cooperation Research Center should incorporate the recommendations of today’s meeting, and make a new research report as soon as possible. At an appropriate time, the Northeast Asia Economic Forum will hand over the report to the central governments of China, Japan and Korea for consideration. Second, it is suggested that the Chinese, Japanese and Korean members of the Northeast Asia Financial Cooperation Research Center should work actively to persuade their countries’ central governments to support the establishment of the NEABCD. Third, the central government of China, or of Korea or of Japan should be the first to propose the establishment of the NEABCD, and make it become a major topic of the China, Japan and Korea Summit in 2013.

The third and final session on Energy, Environment and Cross-border Infrastructure featured information about "smart" technology, the importance of reducing carbon dioxide emissions, and the benefits of renewable energies and green growth strategies.

A major theme that the participants discussed throughout the conference is the important shift of discussing details, especially in the area of financing, as a method to move from generalizations about Northeast Asian cooperation to implementable functional cooperation.

Forum participants expressed appreciation for the support provided by the Freeman Foundation and other cooperating institutions for the Young Leaders Program, now in its seventh year, which features Fellows from the People’s Republic of China, Japan, Republic of Korea, Mongolia, the Russian Federation, and the United States.  The Fellows’ attendance contributed to the Forum’s goal of ensuring a long-term future of cooperation and integration in Northeast Asia.The NEAEF expressed its gratitude to the Research Center for Financial Cooperation in Northeast Asia and the Asia Pacific Institute of China for hosting and providing generous support for the Forum’s annual conference in Hainan. The NEAEF also expressed its gratitude to the Korea Institute for International Economic Policy; The Freeman Foundation, the College of Social Sciences, University of Hawaii at Manoa; China Association for Social and Economic System Analysis Research; Tianjin Municipal Government; Korea Telecom; Korea International Trade Association; Korea Asia Pacific Institute; Hitachi; Japan Electric Power Information Center; Nankai University and other cooperating institutions for their assistance with the Forum conference and the Young Leaders Program in Hainan.