Background, mission and goal and network of cooperation and partnership 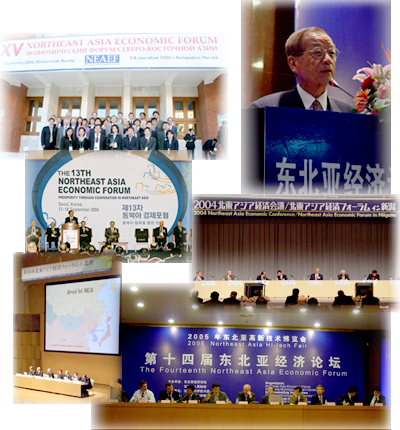 The main objective is for NEAEF to conduct research and conference activities aimed at functional economic cooperation such as cross-border energy, transportation and logistics infrastructure development, capital mobilization. The Forum holds annual conferences, workshops and seminars for planning, facilitating, coordinating, and implementing international and interdisciplinary solutions to common policy problems.

It is the only nongovernmental regional organization in which all the nations of Northeast Asia and the U.S. are consistent and active participants and its Chairman is Dr. Lee-Jay Cho who has more than 30 years of experience in international and regional cooperation.  Former Governor of Hawaii, George Ariyoshi is Chairman of the Board of Hawaii Asia Pacific Institute (HAPI) in Hawaii which serves as the secretariat together with Board member, Dr. Denise Konan, Dean of the University of Hawaii’s College of Social Sciences (affiliate of  NEAEF).